Notes that Viola Muse made during her interview with Charles Coates, aged 108, a long-time resident of Jacksonville, Florida.

The interview was conducted on December 3, 1936, at the home of Coates and his wife Irene, also interviewed by Muse on that same occasion (see Irene Coates Interview Notes and Charles and Irene Coates Age and Date Calculations).

The notes in this document were used in the creation of the published narrative about Charles Coates, found on pages 65-73 of Works Progress Administration Federal Writers’ Project, Slave Narratives, vol. 3, and included in this edition as Charles Coates Narrative (2 of 2).

Some of the information in these notes does not appear in the published Charles Coates narrative, however, but rather in that which corresponds to Irene Coates, found in that same volume, pages 74-79, and included in this edition as Irene Coates Narrative (4 of 4).

Most notably, the anecdotes about a slave woman's killing of an overseer and Mrs. Lincoln's reaction to a slave being beaten, found on pages 15-18 of this document, appear on pages 75-76 of the published Irene Coates narrative. Although Charles appears to be the source, the two stories are presented in Slave Narratives as having been related to Muse by Irene:

Although Irene was just about six years old when the Civil War ended, she has vivid recollection of happenings during slavery. Some of the incidents which happened were told her by her slave associates after slavery ended and some of them she remembers herself.

Two incidents which she considers caused respect for slaves by their masters and finally the Emancipation by Abraham Lincoln she tells in this order.

The first event tells of a young, strong healthy Negro woman who knew her work and did it well. 'She would grab up two bags of guana (fertiliser) and tote 'em at one time,' said Irene, and was never found shirking her work. The overseer on the plantation, was very hard on the slaves and practiced striking them across the back with a whip when he wanted to spur them on to do more work.

Irene says, one day a crowd of women were hoeing in the field and the overseer rode along and struck one of the women across the back with the whip, and the one nearest her spoke and said that if he ever struck her like that, it would be the day he or she should die. The overseer heard the remark and the first opportunity he got, he rode by the woman and struck her with the whip and started to ride on. The woman was hoeing at the time, she whirled around, struck the overseer on his head with the hoe, knocking him from his horse, she then pounced upon him and chopped his head off. She went mad for a few seconds and proceeded to chop and mutilate his body; that done to her satisfaction, she then killed his horse. She then calmly went to tell the master of the murder, saying "I've done killed de overseer." the master replied-"Do you mean to say you've killed the overseer?" she answered yes, and that she had killed the horse also. Without hesitating, the master pointing to one of his small cabins on the plantation said- "You see that house over there?" she answered yes- at the same time looking- "Well said he, take all your belongings and move into that house and you are free from this day and if the mistress wants you to do anything for her, do it if you want to." Irene related with much warmth the effect that incident had upon the future treatment of the slaves.

The other incident occurred in Virginia. It was upon an occasion when Mrs. Abraham Lincoln was visiting in Richmond. A woman slaveowner had one of her slaves whipped in the presence of Mrs. Lincoln. It was easily noticed that the woman was an expectant mother. Mrs. Lincoln was horrified at the situation and expressed herself as being so, saying that she was going to tell the President as soon as she returned to the White House. Whether this incident had any bearing upon Mr. Lincoln's actions or not, those slaves who were present and Irene says that they all believed it to be the beginning of the President's activities to end slavery. (Works Progress Administration Federal Writers’ Project, vol. III, 75-77)

In addition, the published Irene Coates narrative appears to include information that Charles gives on page 13 about Sunday clothes being made of ausenbur cloth and the role of elderly women in making that cloth:

Besides these incidents, Irene remembers that women who were not strong and robust were given such work as sewing, weaving and minding babies. The cloth from which the Sunday clothes of the slaves was made was called ausenburg and the slave women were very proud of this. The older women were required to do most of the weaving of cloth and making shirts for the male slaves. (77)

The published Irene Coates narrative also echoes a detail that Charles Coates recounts on page 8 of these notes:

Irene recalls the practice of blowing a horn whenever a sudden rain came. The overseer had a certain Negro to blow three times and if shelter could be found, the slaves were expected to seek it until the rain ceased. (77)

The published Irene Coates narrative adds information not found in the Charles Coates interview notes, however:

The master had sheds built at intervals on the plantation. These accomodated a goodly number; if no shed was available the slaves stood under trees. If neither was handy and the slaves got wet, they could not go to the cabins to change clothes for fear of losing time from work. This was often the case; she says that slaves were more neglected than the cattle. (78)

Another custom which impressed the child-mind of Irene was the tieing [sic] of slaves by their thumbs to a tree limb and whipping them. Women and young girls were treated the same as were men. (78) 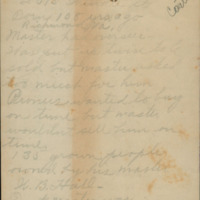 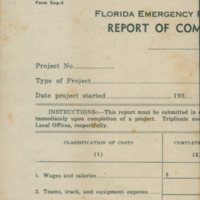 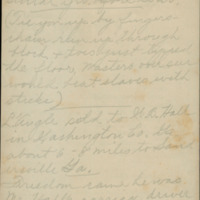 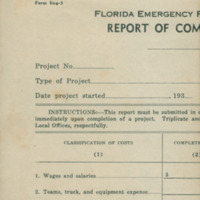 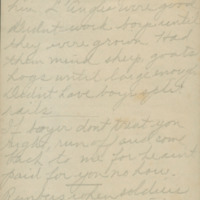 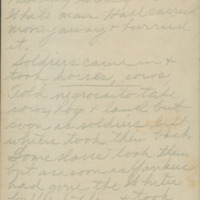 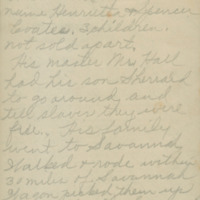 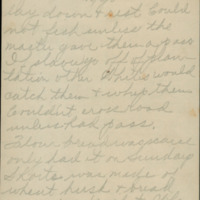 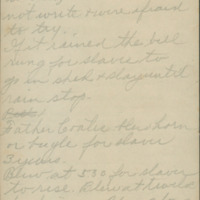 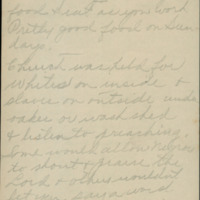 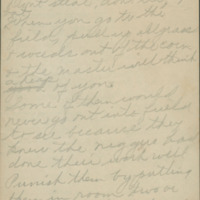 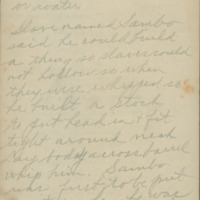 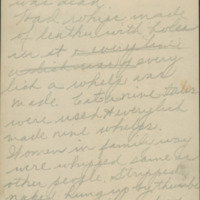 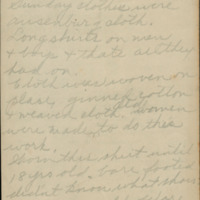 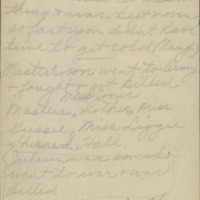 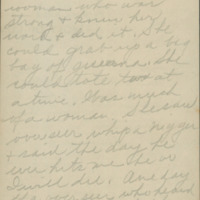 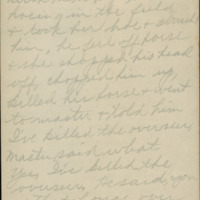 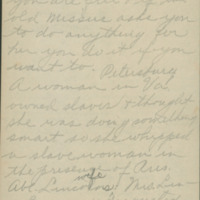 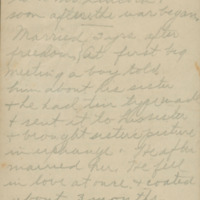